The first school was built in the Duck Creek area in 1888.  Mr. Wilmuth was the teacher. They had a Ball at Mr. B.A. Simpson’s to raise some money.  C.H. Roark was teaching there in 1890. (Hervey 22). In the 1890s, there were four school teachers.  They left an imprint on the town by sending their own children to college as a way to encourage other parents to do the same (Gray 29).  Dr. JC Rice taught school before he became a doctor; he established his practice in Sanger in 1890 (Gray 29). JT Chambers moved to Sanger in 1895 to become the head of Sanger School which was a wood building at the current SMS location (Images, pg. 18). 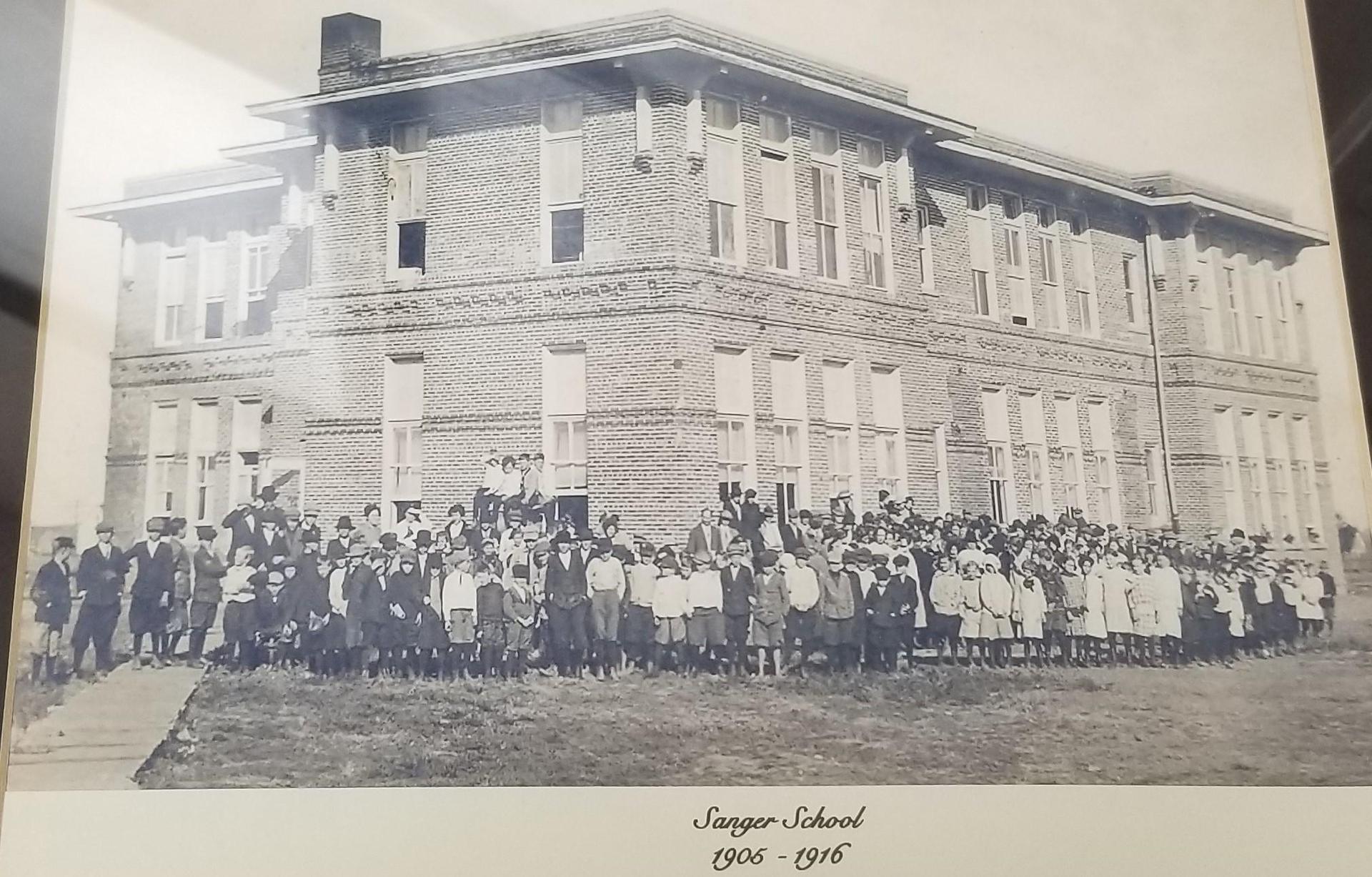 School District (Odom 52). From the December 1899 Sanger Courier, they began “tinning the upper story of the Sanger School building” (Gray 44)

The first brick school was built in 1910 after the original building burnt (Images, pg. 93).  In 1912, Sanger School District qualified as a four-year high school and consolidated former schools of New Liberty, Goodview, and Gribble Springs (Hervey 43).  They continued to consolidate throughout the 1940s and included Green Valley, Milam, Prairie Chapel, Union Hill, Bernard and Blue Mound (Gray 60-4). The brick Sanger School burnt in 1916 and was rebuilt (Images, pg. 7). The school burnt just before Christmas (Gray 125)

The third school, built next to where the Administration building is now, opened in 1917 (Images, pg. 94).  The first class to wear caps and gowns graduated in 1924; there were 31 students (Images, pg. 96). The Sanger Gymnasium, next to Sixth Grade Campus, built in 1935, burnt in 1948.  As part of the insurance money disbursement, the gym and stage were added to the main school building. They also added wings on each side. The only thing that remains of this building is the main administration building (Images, pg. 7).  The school was remodeled in 1948, and it burnt in 1984 (Images, pg. 94)

The printing of annuals was suspended during WWII.  The first “The Sanger Indians” annual was published after WWII in 1946; there were six staff members (Images, pg 100).  Men returning from WWII formed the Sanger Outlaw football team in 1947. They played in uniforms loaded to them by SHS (Images, pg. 82)

The school building that was next to Admin, built in 1977, burnt in 1984 (Images, pg. 7-8).  The first and only female Mayor of Sanger (1984) graduated from Sanger HS (Images, pg. 73). In reminiscing about their teachers, Mrs. Gray and Mrs. Ruby Cherry liked Mrs. Gray’s mother, Mrs. Sam H. Sullivan, Miss Inez Nicholson, Mr. and Mrs. George Tummins and Miss Bess Ashley who ingrained love of poetry in the young ladies (Gray 44).

Have anything you would like to share?  We would love to include it here.  Email any information you have to: [email protected]

Images of America: Around Sanger

The Story of Sanger by Eunice Sullivan Gray