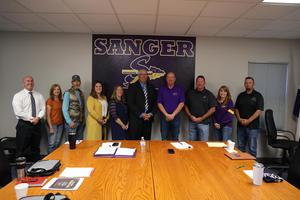 Sanger ISD trustees unanimously approved the hire of Micha Picha at a board meeting on Friday, Sept. 30.

Sanger ISD trustees unanimously approved the hire of Mr. Mike Picha as the district’s new Director of Safety and Security at a board meeting on Friday, Sept. 30.

Mr. Picha has spent the past seven years as the Director of Public Safety at Wise Health System in Decatur. He has over 20 years of experience in law enforcement. Prior to Wise Health System, Mr. Picha served as a Public Safety Patrol Sergeant/Second in Command at the City of Decatur Police Department from 2006-2015. During his tenure, he was frequently appointed by the Chief of Police as acting Chief and executive in his absence.