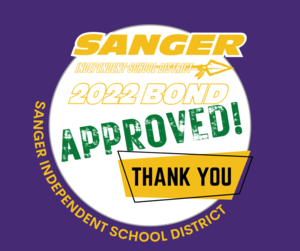 The bond will help SISD address rapid growth by building a new high school, athletic annex and agricultural facility while making renovations to existing campuses.
Sanger ISD voters approved a $130,000,000 bond in the Saturday, May 7 bond election.
The bond, which was developed by 38 Sanger community members who comprised the Long-Range Facilities Planning Committee, includes a new high school, athletic annex, agricultural facility and renovations to existing campuses. More than 57% of voters approved the proposition, with 949 out of 1,655 voting in favor of the bond.
Demographers project Sanger ISD's enrollment to increase by over 1,000 students within the next 10 years. With the district averaging 0.4 students per household and 5,500 planned lots in three subdivisions, Sanger is rapidly growing. This bond and these measures will help the district prepare for that growth.
The new high school will accommodate roughly 1,400 students and will be approximately 265,000 square feet. This added space will give more educational opportunities to all students. In addition, the athletic annex will house all of the high school's outdoor sports teams. It will provide a shelter during periods of inclement weather, and it will also have classrooms for sports medicine through the district's Career and Technical Education (CTE) program.
The new agricultural facility, which is used by the largest CTE program in the district, will have turnouts to house large animals. The facility will also be large enough so Sanger ISD can host future jackpot shows.
Lastly, the bond will allow Sanger ISD to make various capital improvements at existing campuses. A storm shelter will be installed at Clear Creek Intermediate, as well as fire sprinklers. A security vestibule will be added at Chisholm Trail Elementary.
The district will also undergo grade reconfiguration with the passage of the bond. Clear Creek and Butterfield will become 1st-5th grade campuses. Chisholm Trail will become a Pre-K and Kindergarten-only campus. Additionally, the district will also no longer have a standalone Sixth Grade Campus. Sixth grade will merge and join the middle school.
Middle school staff and students will then move to the existing high school, which will become the new middle school, when the new high school is complete. Grade reconfiguration at the elementary level is expected to start beginning in the 2024-2025 school year. The tentative completion date for construction of the new high school is Fall 2025, which is the same time sixth grade will merge with the middle school. When the existing middle school is vacated, Linda Tutt High School will move into it, which will also tentatively take place Fall 2025.
Finally, tentatively in Fall 2025, SISD's administration offices will move into the current Sixth Grade Campus, and the Denton County Special Education Co-Op will house the entirety of the existing SISD admin building.
Print